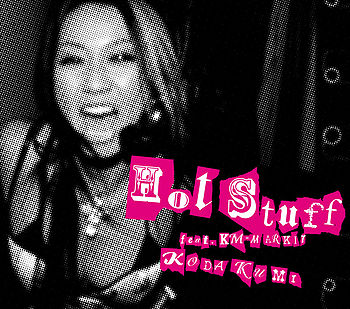 "Hot Stuff" is the 15th single released by Koda Kumi, and it features rapper KM-MARKIT. The main track was used as the "Ryuuha-R" ending theme song during April of 2005. The single reached #10 on Oricon charts and charted for 6 weeks. It sold 16,807 units in it's first week and the most recent figures show that it sold a total of 29,509 units. This single was limited to 30,000 copies.

There are five versions of "Hot Stuff" to be currently found in Koda Kumi's discography.

The music video for "Hot Stuff" was directed by Kubo Shigeaki and produced by Murakoshi Hayato. It was choreographed in part by former backup dancer AKIKO.

It features Kuu paticipating in underground fights, catching the eye of an onlooking KM-MARKIT. Her and her female crew then proceed to have a dance-off with KM-MARKIT's crew. After defeating most if not all of his fighters, the PV ends with KM making his way through the crowd and locking eyes with Kuu.

A dance version was later released on the DVD accompanying BEST ~BOUNCE & LOVERS~, which eliminated all scenes with KM-MARKIT and fighting and focused solely on the dance battle.