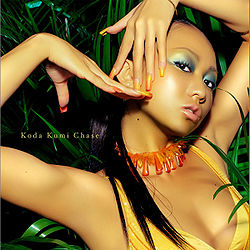 "Chase" is the twelfth single released by Koda Kumi. The main track was used as the the ending theme for ANB's program "Samaazu to Yuka no Ayashii××Kashi Chau no Kayo!!". The single reached #18 on Oricon charts and charted for 8 weeks. It sold 11,764 units in it's first week and the most recent figures show that it sold a total of 21,690 units.

The music video for "Chase" was directed by Sunaga Hideaki and produced by Toyomura Keiichi of SEP.

It features Kuu in a hotel as two different people: a jewel thief under the guise of a maid/room service worker and an implied bank robber. Under the guise of a brightly-dressed maid Kuu sneaks into hotel rooms to steal people's valuables. The robber is lounging in a bed in the same hotel, being spied on by a lewd FBI agent. At the end of the video, a half-dozen police officers arrive, running down the hall. The jewel thief thinks she's being apprehended, tries to run, falls, and braces herself for an arrest; they run past her however, and burst into the robber's room where they uncover a briefcase filled with stacks of money. After watching the robber being escorted past her, the jewel thief makes her way easily out of the hotel, large gemstone in hand.

There are three versions of "Chase" to be currently found in Koda Kumi's discography.