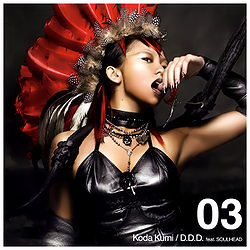 "D.D.D. feat. SOULHEAD" is the twenty-first single released by Koda Kumi and the third release in the "12 Days of Christmas" release season. The cover art is meant to have a British punk theme. "D.D.D. feat. SOULHEAD" was limited to 50,000 copies. The main track was used in Suzuki's CM for the resale of Chevy's "MW" from 2006 to 2007. The single reached #5 on Oricon charts and charted for 5 weeks. It sold 42,548 units in it's first week and the most recent figures show that it sold a total of 48,036 units. Because this single sold 48,036 copies in 2006, it became the #188 single of the year. This single and Pray / XXX of SOULHEAD won the prize for the best collaboration.

The music video for "D.D.D." was directed by Ryuji★Seki and produced by Murakoshi Hayato and Fuku Kazutoshi.

The music video for "D.D.D." was directed by Ryuji★Seki and produced by Murakoshi Hayato and Fuku Kazutoshi.

There are seven versions of "D.D.D. feat. SOULHEAD" to be currently found in Koda Kumi's discography.