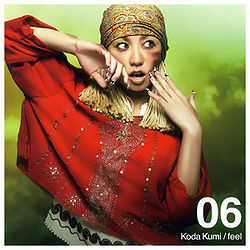 "feel" is the twenty-fourth single released by Koda Kumi and the sixth release in the "12 Days of Christmas" release season. The cover art is meant to have a Spanish theme. "feel" was limited to 50,000 copies. The song is a slow, mellow R&B-influenced love song, and it is also the first Japanese Koda Kumi single to feature an entire chorus in English. The rest of the song is in Japanese with a few more phrases in English. The single reached #1 on Oricon charts and charted for 6 weeks. It sold 39,110 units in it's first week and the most recent figures show that it sold a total of 46,136 units. This single is Koda Kumi's second #1 single of her career, after "you". Because this single sold 48,116 copies in 2006, it became the #187 single of the year.

There are two versions of "feel" to be currently found in Koda Kumi's discography.