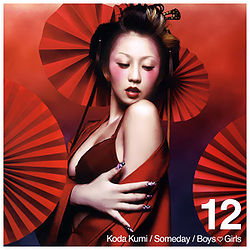 "Someday / Boys♡Girls" is the thirtieth single released by Koda Kumi and the last release in the "12 Days of Christmas" release season. The cover art is meant to have a Japanese theme. "Someday / Boys♡Girls" was one of the three singles of this release season not to be limited to 50,000 copies. "Someday" was the TV Show "Shin Kyoto Meikyuu Annai"'s theme song, whereas "Boys♡Girls" was the movie "WATERS" theme song. The single reached #3 on Oricon charts and charted for 9 weeks selling 58,372 units in its first week and 89,413 units totally. Because this single sold 89,413 copies in 2006, it became the #110 single of the year.

There are three versions of "Someday" and two versions of "Boys♡Girls" to be currently found in Koda Kumi's discography.