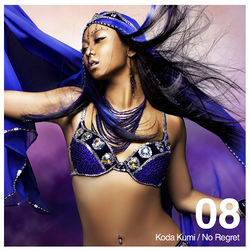 "No Regret" is the twenty-sixth single released by Koda Kumi and the eighth release in the "12 Days of Christmas" release season. The cover art is meant to have a Persian theme. "No Regret" was one of the three singles in this season that was not a limited release. The main song was used as the opening theme song for anime "Law of Ueki". The coupling track, "Rain" is a song from her previous album feel my mind. The single reached #4 on Oricon charts and charted for 12 weeks. It sold 72,081 units in it's first week and the most recent figures show that it sold a total of 131,348 units. As this single sold 131,348 copies in 2006, it was the #74 single of the year.

There are three versions of "No Regret" to be currently found in Koda Kumi's discography.