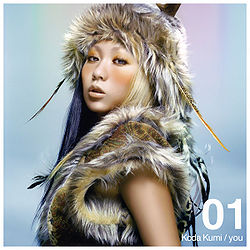 "you" is the nineteenth single released by Koda Kumi and the first release in the "12 Days of Christmas" release season. The cover art is meant to have an Alaskan (Eskimo) theme. The main track was used as "GemCEREY" CM song while "Sweet Kiss" is the Lotte's "Pure White Gum" CM song. "you" is one of the three non-limited singles. The single reached #1 on Oricon charts becoming the first #1 single of Koda Kumi's career. It charted for 15 weeks selling 72,111 units in its first week and the most recent figures show that it sold a total of 182,443 units. As this single sold 190,060 copies in 2006, it was the #50 single of the year.

"you" is certified platinum for over 250,000 full-length song downloads on cellphones.

The music video for "you" was directed by Kubo Shigeaki and produced by Murakoshi Hayato.

There are six versions of "you" to be currently found in Koda Kumi's discography.