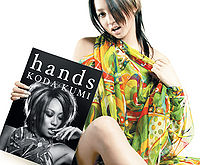 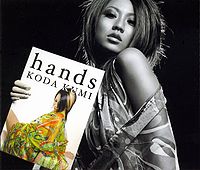 "hands" is the fourteenth single released by Koda Kumi. The main track was used as the ending theme to the TV show "Ucchan Produce" while Through the sky was the ending theme of NTV's "The Sunday". The single reached #7 on Oricon charts and charted for 8 weeks. It sold 22,693 units in it's first week and the most recent figures show that it sold a total of 48,910 units.

The music video for "hands" was directed by Ippe Morita and produced by Sumitaka Fushimizu. It was choreographed by former backup dancer AKIKO.

The PV Kuu dealing with the sadness of a break-up and being alone, alongside the burden of a career in fame. She sees another version of herself in the mirror, who is able to be with the one she loves.

There are two versions of the PV, from the single's DVD and secret 's DVD; they are essentially the same, however, the album version omits certain scenes to focus on Kuu's isolation.

There are three versions of "hands" to be currently found in Koda Kumi's discography.