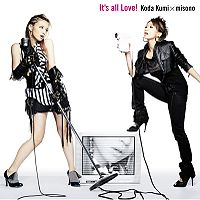 "It's All Love!" is the 43rd single released by Koda Kumi and misono's 13th single, and their first split single. Like "TABOO", the single was released in CD+DVD and CD-only editions, as well as, a Playroom Edition for members of Koda's fanclub. The A-side, "It's all Love!" has elements from both singer's styles, and was used as the ending theme to the TV program Sukkiri! and as the "music.jp" commercial song. "faraway" is a Koda Kumi solo ballad, and was used as a theme song for the movie Subaru. "Tenbin ~Tsuyogari na Watashi x Yowagari na Kimi~" is an acoustic ballad sung by misono, and while there is a music video for the song, it does not show up on the single (but it can be seen on avex's YouTube account). The single reached #1 on the Oricon weekly charts and charted for 6 weeks. It sold 74,014 units in it's first week and the most recent figures show that it sold a total of 99,077 units. It was Koda's third consecutive single to top the Oricon charts, and misono's first to ever hit #1.

"It's all Love!" was certified platinum for over 250,000 full-length song downloads on cellphones.

There are two versions of "It's All Love!" to be currently found in Koda Kumi's and misono's discography. These different versions are: