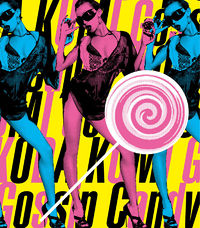 "Gossip Candy" is the 47th single released by Koda Kumi. The lead song "Lollipop" was used as the commercial song for "Seven-Eleven" Online shopping and "music.jp" and it was chosen as the POWER PLAY song for the TV program Happy Music. "Inside Fishbowl" (ending theme for Guru Guru Nineteen) and "Outside Fishbowl" (ending theme for American series Prison Break) are similar to her 2006 single "Yume no Uta / Futari de...", as they share the same melody but have different lyrics. As well, the two songs have the same tempo but have a different key. The first press bonus track, "Got To Be Real", was used as the commercial song for "PEPSI NEX", and is a cover of Cheryl Lynn's song of the same name. The single was also released as a CD+Cap set on July 3rd-4th during Koda Kumi's first stadium live Dream Music Park, and also on the 7th in three different mu-mo shop only editions. All of these editions comes as with a different colored cap: Orange, Green, and Yellow. None of these sets come with a DVD or the song "Got To Be Real". The single reached #4 on the Oricon weekly charts and charted for 11 weeks.

The single is certified gold for a shipment of 100,000 copies, and "Lollipop" is certified platinum for 250,000 full-length song downloads on cellphones. 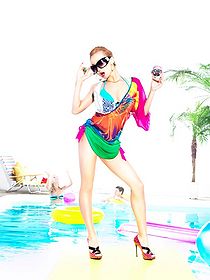