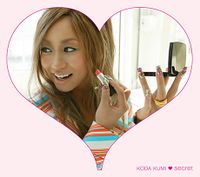 "Selfish" is a pop song by Koda Kumi. The song is found on her fourth studio album secret as track #4.

There are three versions of "Selfish" to be currently found in Koda Kumi's discography.

The music video for "Selfish" was directed by Ippe Morita and produced by Yujiro Noda.

It features Kuu in two settings: one as a mysterious, darkly-clad fanged monster of the night appearing from thin air in a dark lightning-lit mansion, with a large group of men fighting each other and vying for her attention, even as she goes to bite them. Another scene depicts Kuu in the halls of the mansion with her female dancers, scantily-clad in dance outfits, seemingly normal humans but later joined by the men from the other Kuu's inner chambers.

A dance version was later released on the DVD accompanying BEST ~BOUNCE & LOVERS~, which eliminated all scenes in the antechamber and focused solely on vampire Kuu's dance scenes and the alternate Kuu and her dance troupe in the halls.