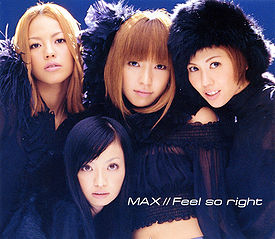 "Feel so right" is the 22nd single released by MAX. The title track was used as an ending theme for the TV Tokyo anime Captain Tsubasa Road to 2002. It reached #17 on the weekly Oricon charts and charted for three weeks, selling 24,000 copies.

There are currently two versions of "Feel so right" to be found in MAX's discography.

Feel so right (Original Karaoke)
Found on the group's twenty-second single, "Feel so right", as track #3.