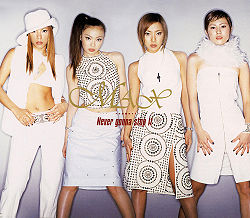 "Never gonna stop it" is the sixteenth single released by MAX. The single is MAX's first self-produced single and marks their departure from pop to hip-hop. It reached #9 on the Oricon charts and charted for eight weeks. The single sold 153,000 copies. The title track was used as an ending theme for the NTV show GIRLS'. It was also used as a theme song for Bourbon Corporation Kudamono Ippai Jelly commercials.

There are currently three versions of "Never gonna stop it" to be found in MAX's discography.