From generasia
(Redirected from Moonlight)
Jump to: navigation, search 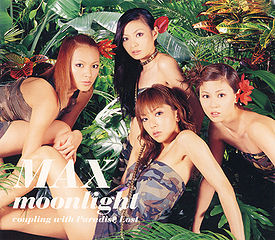 "moonlight" is the twenty-first single released by MAX. It reached #13 on the Oricon charts and charted for four weeks. The single sold 28,000 copies. The title track was used as an opening theme for the TV Tokyo variety show Sukiyaki!! London Boots Daisaku Ikusa.

There are currently rwo versions of "moonlight" to be found in MAX's discography.

moonlight
Found on the group's twenty-first single, moonlight, as track #1. It also appears on the PRECIOUS COLLECTION 1995-2002 album as track #9 on Disc #2.