Give Me a Shake 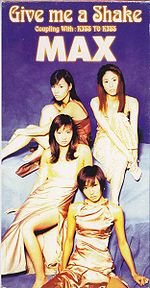 "Give me a Shake" is the sixth single released by MAX. The title track was used as a theme song for movie Give Me a Shake Ladies MAX and for the Tarami Wheaties commercial. It reached #1 on the Oricon charts and charted for ten weeks. The single sold 477,000 copies. It also reached #67 on the yearly Oricon charts for 1997. As this single is MAX's first single to reach #1, "Give Me a Shake" is also MAX's first original song (as the past singles' songs were covered songs).

There are currently six versions of "Give Me a Shake" to be found in MAX's discography.

Give me a Shake (deep club remix)
Found on the group's second original album, MAXIMUM II, as track #13.

Give me a Shake -Sunrise of consuegra mix-
Found on the group's second remix album, MAXIMUM TRANCE, as track #1.