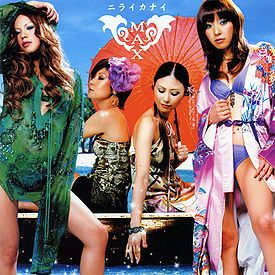 "Nirai Kanai" is the twenty-eighth single released by MAX. The single reached #38 on the Oricon charts and charted for three weeks. The single sold 6,000 copies. The title track was used as a theme song for Orion SOUTHERN STAR commercials. The song Nirai Kanai is based off the folk beliefs of the Okinawan and Anami tribes and features the genre "Okinawan Eurobeat", coined by the group.

There are currently two versions of "Nirai Kanai" to be found in MAX's discography.

Found on the group's twenty-eighth single, Nirai Kanai, as track #1. It is also on the Jewel of Jewels album as track #8.

Found on the group's twenty-eighth single, Nirai Kanai, as track #4.