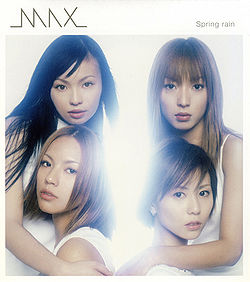 "Spring rain" is the 23rd single released by MAX. This single is the last to feature Mina as she left the group soon after the single was released for a six year hiatus from the group. The single reached #28 on the weekly Oricon charts and charted for three weeks. The single sold 20,000 copies.

There are currently four versions of "Spring rain" to be found in MAX's discography.