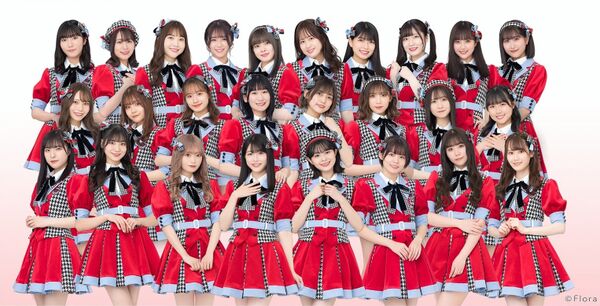 NGT48 is a Japanese idol group produced by Akimoto Yasushi. They are based in Niigata and made their theater debut in January of 2016. The group are under EMI Records as of 2020.

NGT48's theater is located on the fourth floor of the LoveLa Bandai 2 building, a shopping mall in Niigata.

Plans for a new sister group based in Niigata, a port city in the northwest of Japan, were announced at the end of AKB48's Request Setlist Best 1035 2015 event. During the spring shuffle that occured in March, Kitahara Rie was transferred to the new group as its captain while Kashiwagi Yuki will hold a concurrent position in both AKB48 and NGT48. The AKB48 Group Draft Kaigi in May saw the addition of two new members, Nishigata Marina and Ogino Yuka, both of whom were AKB Baito members.

Auditions officially kicked off on April 5th and wrapped up on May 18th. Out of 5,850 applicants, 22 members were announced to have passed the audition on July 25th, 2015, bringing the total number of members to 26. Their identities were revealed on August 21st at their first ever event held in front of the Niigata City History Museum.

On January 10, 2016, NGT48 made their theater debut with the stage, "PARTY ga Hajimaru yo". Team NIII was also formed, with Kitahara Rie as the team's captain. The remaining members were placed in kenkyuusei.

On April 12, 2017, NGT48 released their debut single, "Seishun Dokei," under Ariola Japan. The single's Senbatsu consisted of Team NIII. The group released their second single eight months later, titled "Sekai wa Doko Made Aozora na no ka?" The Senbatsu also consisted of Team NIII, but with the addition of Kado Yuria and Miyajima Aya, the only ranking kenkyuusei members from the year's AKB48 Senbatsu Election.

On August 21, 2017, Kitahara Rie announced her graduation during the group's 2nd anniversary event.

On April 11, 2018, NGT48 released their third single, "Haru wa Doko Kara Kuru no ka?" The Senbatsu consisted of all active NGT48 members, including Team NIII and kenkyuusei, marking the first instance within the 48 Group since AKB48's Sakura no Hanabiratachi to feature all members in the Senbatsu. The single was also the last appaearance of Kitahara Rie, who graduated in June 2018.

On April 13, 2018, NGT48 held their first team shuffle. The remaining first-generation kenkyuusei members were promoted, and a second team, Team G, was formed.

In early 2019, the assault case of Yamaguchi Maho resulted in severe public criticism and scrutiny. On March 29th, the city of Niigata announced that they were cutting ties with NGT48, including ending their radio show, "Port de NGT." On April 11th, NGT48 management announced that on April 21st, Team NIII and Team G will be disbanded, with the members being placed in a unified "first generation." On April 17th, Kashiwagi Yuki announced her withdrawal from NGT48, with her last performance being on April 21st. Yamaguchi, along with Sugahara Riko and Hasegawa Rena, also announced their graduations from the group, scheduled for May 18, 2019.

On May 21, 2019, Kato Minami was demoted to kenkyuusei, due to a scandal involving her social media post of Yamaguchi's graduation. Following the incident, NGT48 management announced that they would be halting all social media posts from all members.

On August 3, 2019, NGT48 held their first concert at Tokyo Idol Festival, after several months of inactivity. The remainder of 2019 and early 2020 saw several graduations from the group, including first generation members Murakumo Fuka, Sato Anju, and Takakura Moeka.

On July 22, 2020, NGT48 released their fifth single, "Sherbet Pink." It was the group's first single in almost two years, as well as their first after switching labels to EMI Music Japan. The Senbatsu consisted of all (30) active members, and was centered by draftee and kenkyuusei member Fujisaki Miyu. A month after the single's release, first generation member Tano Ayaka announced her graduation from the group, which was held on October 31, 2020.

On December 25, 2020, the remaining kenkyuusei members were promoted to their respective generations, including 4 "third generation draftees" and 12 "second generation" members. Kato Minami was also promoted back to "first generation" member; however she announced her graduation from the group, which was held on January 31, 2021.

On July 23, 2021, first generation member Ogino Yuka announced her graduation from the group. Her graduation live was held on November 8, 2021.

On January 10, 2022, auditions for the group's third generation were announced. First generation member and NGT48 captain Kado Yuria also announced her graduation from the group. 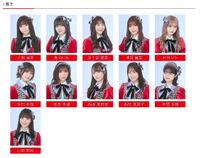 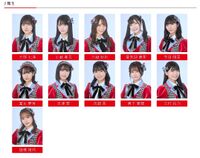