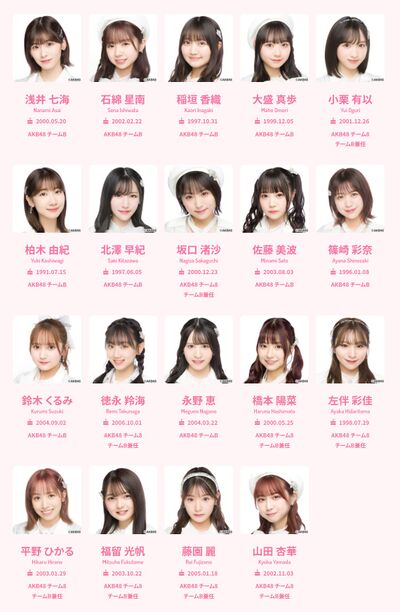 Team B (チームB) is one of five teams that form AKB48. Their team color is blue.

Promoted Kenkyuusei to Team B

Loan Members to Team B

The following members are outside of AKB48 and hold a dual position with Team B.

The following members are native to Team B and hold a dual position outside of AKB48.

The following members are native to AKB48 Team 8 and hold a dual position with Team B.

AKB48 held its third audition in 2006, and the 3rd generation of members who were meant to be Team B made their first appearance in the theater on December 8, 2006. Around the same time, it was announced that Urano Kazumi, Hirajima Natsumi, Masuyama Kayano and Watanabe Shiho would be transferred to Team B to act as a teacher figure for the new members. After Orii Ayumi's graduation, however, Masuyama Kayano remained in Team A.

Team B debuted on April 8, 2008, and performed two revival stages throughout 2007. After Team B's first stage, Watanabe Shiho graduated from AKB48 and was replaced by Saeki Mika, the first kenkyuusei to be promoted to a team. In February, 2008, they began performing their first original stage. In August, 2008, Kikuchi Ayaka was fired due to a scandal.

In August 2009, Saeki Mika graduated and the announcement was made that the teams would be shuffled in October 2009.

In January 2012, Hirajima Natsumi (and Yonezawa Rumi) was caught in a scandal and withdrew. Then in March 2012, during AKB48's concert in Saitama Super Arena, it was announced that Watanabe Miyuki from NMB48 Team N would be joining Team B through a concurrent position, as well as continuing her activities with Team N.

On August 24, 2012, the teams were shuffled as part of the Tokyo Dome Team Shuffle.

On February 1, 2013, Minegishi Minami was demoted to Kenkyuusei following a scandal.

On February 24, 2014, it was announced during the AKB48 Group Daisokaku Matsuri that the teams would be shuffled in April 2014.

On May 10, 2015, during the AKB48 Group Draft Kaigi 2015, Takahashi Kira, Nishikawa Rei, and Yamabe Ayu were drafted to Team B, but instead of being promoted to the team, they started as Kenkyuusei members. Takahashi graduated from AKB48 in April 2017, while Nishikawa and Yamabe were promoted to Team B in September 2017.

On February 21, 2016, AKB48 Taiwan Audition winner Ma Chia-Ling was promoted to Team B after moving to Tokyo. Her first team song was Koi wo Suru to Baka wo Miru, which was a coupling song for the single Tsubasa wa Iranai.

On April 8, 2017, founding member Tanabe Miku announced her graduation from the group.

On January 21, 2018, during the AKB48 Group 3rd Draft Kaigi, five members were drafted to Team B, which include Otake Hitomi, Omori Maho, Kamiyama Riho, Kitagawa Yuri, and Saito Haruna. Instead of being promoted to the team, they started as Kenkyuusei members. Kitagawa left the group in March 2018, while Kamiyama left the group in October 2018. Omori was promoted to Team B in December 2018, while Otake and Saito were promoted in September 2019.

On March 13, 2019, captain Takahashi Juri announced her graduation from AKB48, declaring that she signed under South Korean label Woollim Entertainment. Her captaincy was transferred to Iwatate Saho after graduating on May 2, 2019.