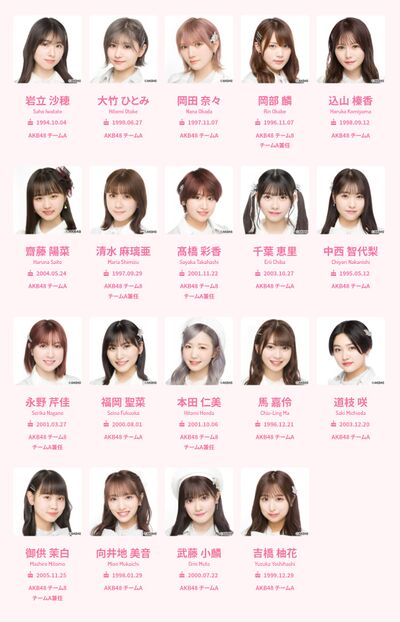 Team A (チームA) is one of five teams that form AKB48. Their team color is pink.

Promoted Kenkyuusei to Team A

Loan Members to Team A

The following members are outside of AKB48 and hold a dual position with Team A.

The following members are native to Team A and hold a dual position outside of AKB48.

The following members are native to AKB48 Team 8 and hold a dual position with Team A.

On June 2005, Akimoto Yasushi had his first audition for his "Akihabara 48 Project", a project for a group that featured 48 girls who performed in their own theater. By October, he had picked 24 girls to be the first group of members for what came to be known as AKB48, and on December 8, 2005, 20 girls debuted in the Akihabara 48 Theater. At the end of Team A's first stage, Usami Yuki graduated to pursue a career in gravure.

On April 2012, founding member Maeda Atsuko announced her graduation from the group, and graduated on August 27, 2012.

On June 2012, Sashihara Rino was transferred to HKT48 following a scandal.

On August 24, 2012, the teams were shuffled as part of the Tokyo Dome Team Shuffle. These changes took effect starting November 2012.

On June 8, 2013, during the AKB48 5th Annual General Election, founding member Shinoda Mariko announced her graduation from the group. Her captaincy was transferred to Yokoyama Yui after graduating on July 21, 2013.

On February 24, 2014, it was announced during the AKB48 Group Daisokaku Matsuri that the teams would be shuffled and would take effect starting April 2014.

On May 25, 2014, members Iriyama Anna and Kawaei Rina were injured along with a staff member and other fans during a handshake event in Iwate. Both members took a break to recover from their injuries. Kawaei returned to the theater on October 8, 2014, while Iriyama returned on February 13, 2015.

On December 8, 2014, during AKB48's ninth anniversary show, founding member Takahashi Minami announced her graduation from the group, which was set for December 8, 2015, the group's tenth anniversary. Due to production delay, her graduation ceremony was postponed to March 26-27, 2016, while her last theater performance was postponed on April 8, 2016.

On March 26, 2015, it was announced during the AKB48 Spring Concert 〜Jikiso Imada Shugyouchu!〜 concert that the teams would be shuffled and would take effect starting August 2015. On the same day, Kawaei Rina announced her graduation from the group, declaring that since she could not participate in handshake events anymore after the handshake assault at Iwate, she now wants to focus on her acting career. Kawaei graduated on August 4, 2015.

On June 18, 2016, during the AKB48 45th Single Senbatsu Sousenkyo, founding member Kojima Haruna (who portrayed fictional idol Nyan Nyan Kamen) announced her graduation from the group. Her graduation concert was held on February 21-22, 2017 at Yoyogi National Stadium First Gymnasium, and she graduated from the group on April 19, 2017.

On January 21, 2018, during the AKB48 Group 3rd Draft Kaigi, three members were drafted to Team A, which were Sato Shiori, Furukawa Nazuna, and Honda Sora. Instead of being promoted to the team, they started as Kenkyuusei members. Sato graduated in November 2019, while Furukawa and Honda were promoted to Team A on Decemeber 2020.

On December 8, 2018, it was announced that Mukaichi Mion would become the next AKB48 Group general manager (総監督; soukantoku) beginning April 2019. The position was previously held by teammate Yokoyama Yui.

Note: Team A was the only team formed for AKB48 at the time these singles were released.