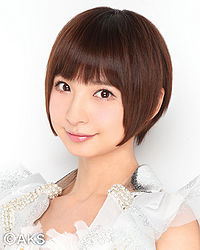 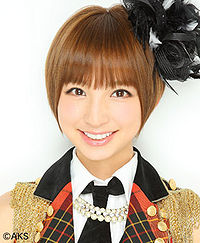 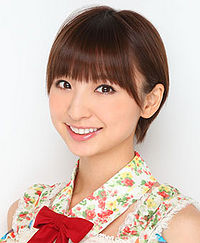 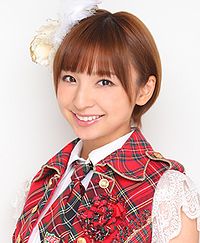 Shinoda Mariko (篠田麻里子) is a Japanese talent and fashion model managed by SOMEDAY. She was an original member and former captain of AKB48's Team A. 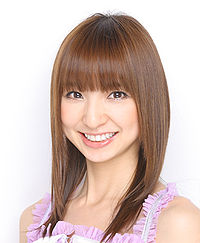 After finishing high school Shinoda Mariko auditioned for the first generation of AKB48 and failed. Not wanting to give up her dreams she started working part time in the cafe on the same floor as the AKB48 theater. At the time of AKB48's humble beginnings, a vote box for fans was placed in the lobby to write the name of the member they liked. They encountered a number of votes of an unknown girl whom they found out was Shinoda Mariko who worked part time at the cafe. Intrigued by this, Akimoto Yasushi challenged her to remember 12 songs in four days in turn she'll be able to perform on stage. Two months after the group debuted, through customer's feedback she was able to join the group before the second generation and is the only member referred to as generation 1.5.

It is for this reason that she is not present in the DVD of Team A's first stage but can be seen in the PV to the single "Skirt, Hirari"; the first she participated in, unlike the rest of Team A who had all previously participated in the single "Sakura no Hanabiratachi."

It was not long after joining that Shinoda began to exhibit her potential and improved rapidly - while it had seemed that Akimoto had chosen his consistent leads in "Skirt, Hirari" as Sukahira Seven and intended to stick with them, over time he appears to have changed his mind and pushed Shinoda to the group's forefront in place of Narita Risa.

Shinoda is perhaps most widely known for her love of Hamtaro, and the song "Koike" from Team A's third stage, in which she took all of the speaking parts along with a lead singing role. On July 21, 2013, she graduated from AKB48, with her graduation ceremony taking place in her hometown of Fukuoka.