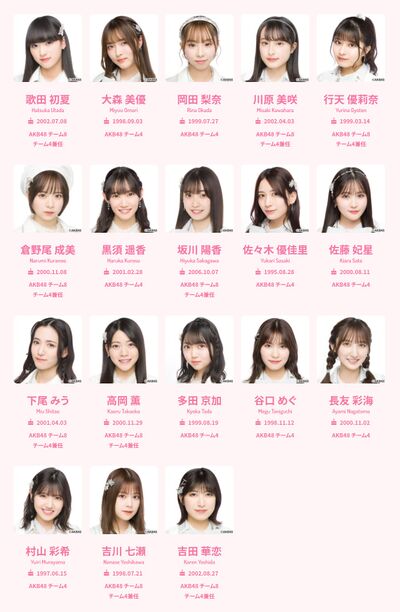 Team 4 (チーム4) is the fourth team formed from AKB48. Their team color is yellow. Their name stands both for being AKB48's fourth team as well as the fourth digit in AKB48.

The following members are outside of AKB48 and hold a dual position with Team 4.

The following members are native to Team 4 and hold a dual position outside of AKB48.

The following members are native to AKB48 Team 8 and hold a dual position with Team 4.

On December 8, 2010, Oba Mina, Shimazaki Haruka, Shimada Haruka, Takeuchi Miyu, Nagao Mariya, Nakamura Mariko, Mori Anna, and Yamauchi Suzuran were promoted to full-status members from Kenkyuusei. At the time, their status within the group was undetermined and they continued performing as Kenkyuusei members. Three months later, Nakamata Shiori was given the same promotion, followed by Ichikawa Miori in late May.

During AKB48's revival performances in Tokyo Dome City Hall, it was announced that the promoted Kenkyuusei members were to be placed in a new team, Team 4. Details regarding their debut were to be disclosed later. During AKB48's concerts in Seibu Dome, it was announced that Kenkyuusei members Iriyama Anna and Abe Maria would be promoted to Team 4.

Before their debut, on September 2, 2011, Oba Mina was suspended due to various scandals being related to her. Mori Anna resigned at the same time due to a back injury. Team 4 made their debut with a revival of Himawarigumi 1st Stage "Boku no Taiyou" in October.

On March 13, 2012, Iwata Karen, Kato Rena, Kawaei Rina, Takahashi Juri, and Tano Yuuka were promoted to Team 4, with the team now having 16 members.

On August 24, 2012, Team 4 was disbanded during the Tokyo Dome Team Shuffle, with all members being transferred in the remaining three teams.

On February 24, 2014, the teams were shuffled as part of the AKB48 Group Daisokaku Matsuri.

On October 14, 2014, Takashima Yurina became announced her graduation from Team 4, and on December 27, became the second member to graduate from Team 4.

On May 10, 2015, during the AKB48 Group Draft Kaigi 2015, Chiba Erii was drafted to Team 4, but instead of being promoted to the team, she started a Kenkyuusei member.

On June 18, 2016, during the AKB48 45th Single Senbatsu Sousenkyo, Okada Nana and Takahashi Juri became the first Team 4 members to rank in Senbatsu, with both members ranking 14th and 15th, respectively.

On February 23, 2017, it was announced that Okada Nana would hold a concurrent position with STU48 as the group's captain.