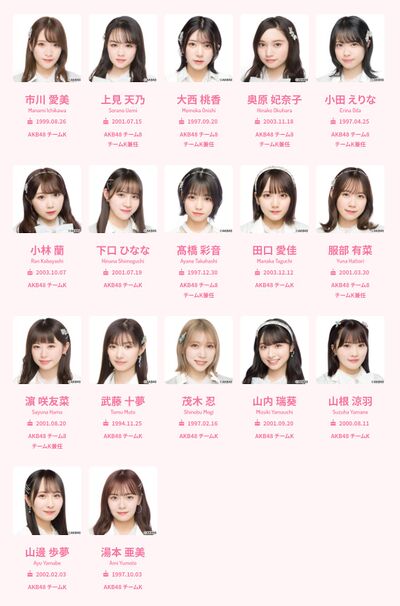 Team K (チームK) is one of three teams that form AKB48. Their team color is green.

The following members are outside of AKB48 and hold a dual position with Team K.

The following members are native to Team K and hold a dual position outside of AKB48.

The following members are native to AKB48 Team 8 and hold a dual position with Team K.

In December 2005, an audition was held for the second generation of AKB48, Team K. 18 girls were chosen and in April 2006 they started preforming at the AKB48 theater. Their first stage, PARTY ga Hajimaru yo, was recycled from Team A. On June 17th 2006, Uemura Ayako graduated, making her the first Team K member to graduate AKB48.

In June 2010, founding member Ono Erena announced her graduation from the group to focus on her acting at the end of the summer. Shortly after her graduation in September 27, 2010, Yokoyama Yui was promoted to Team K.

In January 2012, Yonezawa Rumi (and Hirajima Natsumi) was caught in a scandal and withdrew. Then in March 2012, at AKB48's concert in Saitama Super Arena, it was announced that Matsui Jurina from SKE48 Team S would be joining Team K through a concurrent position, as well as continuing activities with Team S.

On August 24, 2012, the teams were shuffled as part of the Tokyo Dome Team Shuffle.

On February 2, 2013, first generation member Itano Tomomi announced her graduation from the group, and graduated on August 25, 2013.

On April 7, 2013, founding Team K member Akimoto Sayaka announced her graduation from the group, and graduated on August 22, 2013.

On June 8, 2013, Miyazawa Sae became the first member to cancel a concurrent position. She cancelled her position with Team K to remain in SNH48.

On September 1, 2013, Nozawa Rena from JKT48 Team J was given a concurrent position with Team K.

On December 31, 2013, founding member Oshima Yuko announced her graduation from the group. Her graduation was held on June 9, 2014, during the group's sixth annual Senbatsu Election.

On February 24, 2014, it was announced during the AKB48 Group Daisokaku Matsuri that the teams would be shuffled in April 2014.

On May 10, 2015, during the AKB48 Group Draft Kaigi 2015, Kubo Satone and Nomura Nao were drafted to Team K, but instead of being promoted to the team, they started as Kenkyuusei members. Nomura graduated from AKB48 on August 2017, while Kubo was promoted to Team K on September 2017.

On October 21, 2015, Matsui Jurina announced that she will cancel her concurrency with Team K. Her last performance with the group was held on December 24, 2015.

On March 31, 2016, Team B member Kobayashi Kana graduated from AKB48. Along with Miyazawa Sae (from SKE48 Team S and SNH48 Team SII) and Umeda Ayaka (from NMB48 Team BII), they became the last 2nd generation and original Team K members to leave the AKB48 Group.

On April 13, 2016, Yamamoto Sayaka announced that she will cancel her concurrency with Team K. Her last performance with the group was held on May 26, 2016.

On May 1, 2016, Takajo Aki became the last 6th generation member to leave AKB48, following her graduation.

On June 9, 2016, Suzuki Mariya's native position with SNH48 Team SII was revoked, due to the group's contract violation. She became a full-time member of AKB48 until her graduation on June 10, 2017.

On June 17, 2017, the AKB48 49th Single Senbatsu Sousenkyo became the first election where no Team K members ranked in Senbatsu. This also makes the 49th single the first single senbatsu to not feature Team K members (with the exception of the group's indie singles). The farthest ranking Team K member was Mukaichi Mion who ranked 17th.

On January 21, 2018, during the AKB48 Group 3rd Draft Kaigi, six members were drafted to Team A, which include Okada Rina, Katsumata Saori, Kobayashi Ran, Suenaga Yuzuki, Nagano Megumi, and Yahagi Moeka. Instead of being promoted to the team, they started as Kenkyuusei members.