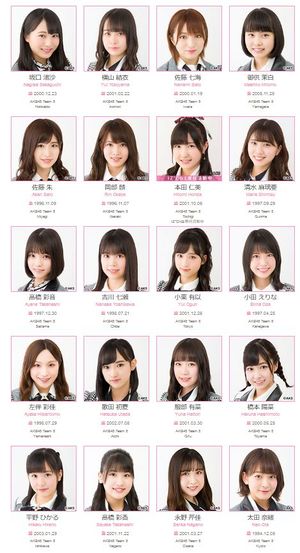 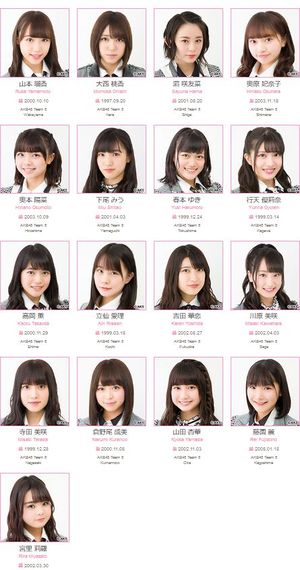 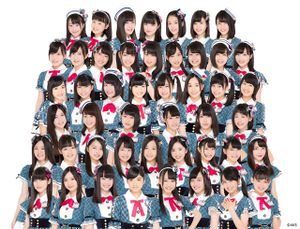 Team 8 (チーム8) is the fifth team formed from AKB48. Their team color is Dark Blue. Unlike the other four teams, this team does not consist of the previous members. Rather than carrying the AKB48 concept "Idols you can meet," the concept of Team 8 is "Idols who go meet you." Each member represents the a different prefecture of Japan, and all members are sponsored by Toyota.

The following members are native to Team 8 and hold a dual position within AKB48 Team A.

The following members are native to Team 8 and hold a dual position within AKB48 Team K.

The following members are native to Team 8 and hold a dual position within AKB48 Team B.

The following members are native to Team 8 and hold a dual position within AKB48 Team 4.

On January 23, 2014, AKB48 announced plans for a fifth team, "Team 8." Auditions were held all throughout Japan on February 2015, in which one member from each of the 47 prefectures would be selected to form Team 8.

On June 18, 2014, Okubora Chinatsu became the first Team 8 member to graduate from the group. Shortly after her graduation, an audition was held in the Gifu prefecture to determine who would represent the prefecture. Hattori Yuna was announced as the winner of the audition, and on July 26, 2014, she debuted with Team 8.

The thirty-seventh single Kokoro no Placard marked the first single to feature Team 8. Their first original song 47 no Suteki na Machi e was a coupling track released on the single's theater edition. The thirty-eighth single Kibouteki Refrain marked the first single to feature a Team 8 member in Senbatsu. Nakano Ikumi was selected as one of thirty-two members to form the single's Senbatsu. The original song Seifuku no Hane was also released as a coupling track for this single.

On January 26, 2015, it was announced that Moriwaki Yui would graduate from the group. Shortly after her graduation, an audition was held in the Fukuoka prefecture to determine who would represent the prefecture. Yoshida Karen was announced as the winner of the audition, and on April 3, 2015, she debuted with Team 8.

On March 26, 2015, Sakaguchi Nagisa, Yamada Nanami, and Nakano Ikumi each obtained concurrent positions with Team B, Team A, and Team K, respectively, as part of the team shuffle that took place during the AKB48 Spring Concert 〜Jikiso Imada Shugyouchu!〜 concert. This makes them the first members to hold concurrent positions within their own team rather than with other sister groups.

On April 2, 2016, Fujimura Natsuki, Yamamoto Ai, and Iwasaki Moeka announced their graduations from the group. Fujimura and Iwasaki graduated the next day on April 3, and Iwasaki retired her application for the 8th Senbatsu Election. Yamamoto graduated on May 1, 2016.