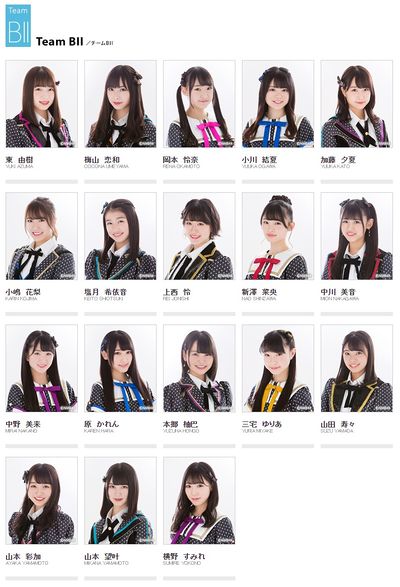 Team BII (チームBII) is the third of three teams that form NMB48. 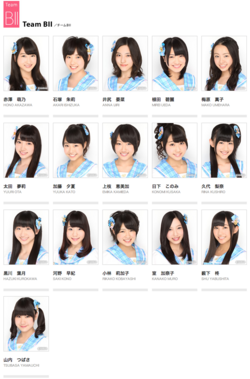 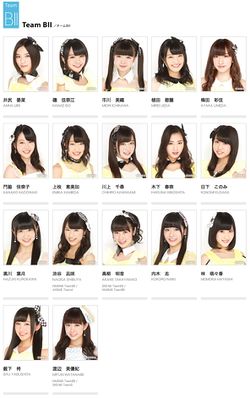 Selected members are chosen to serve concurrent (兼任; kennin) or dual positions within NMB48 and one of its sister groups. Although they participate regularly in both groups, these memberships are only temporary, and after a period of time, they will be released from their second post and returned to their original team.

The following members are outside of NMB48 and hold a dual position with Team BII.

The following members are native to Team BII and hold a dual position outside of NMB48.

Formed on October 10, 2013 using members from NMB48's 3rd Generation Kenkyuusei, they debuted their first stage on that day continuing to perform "Aitakatta". In September of 2013, Kobayashi Rikako went on hiatus for a foot injury. The team held the last performance of their first stage on October 17, 2013. They debuted their second stage Tadaima Ren'aichuu on November 11, 2013. Rikako returned on December 9, 2013. Yamauchi Tsubasa went on a hiatus due to injury on January 19, 2014. On February 24, 2014 all the teams in the AKB48 Group were shuffled. On March 2, 2014 Umehara Mako became the first member to graduate from the team. On April 10, 2014 Kobayashi Rikako graduated from the group to focus on her studies in fashion arts. Yamauchi Tsubasa returned on April 12, 2014. On April 16, 2014 Akazawa Hono decided to wtihdraw from the group due to an injury. Original BII held their final performance on April 15, 2014 and the new team will start performing Saka Agari starting April 22.