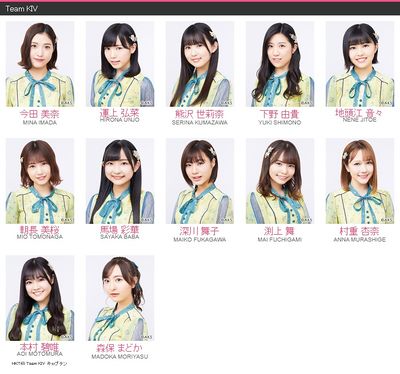 Team KIV (チームKIV) is one of three teams formed for HKT48, along with Team H and Team TII. They are the fourth team to be named with the letter K, after AKB48's Team K, SKE48's Team KII, and JKT48's Team KIII.

Selected members can be chosen to serve concurrent (兼任; kennin) or dual positions within HKT48 and one of its sister groups. Although they participate regularly in both groups, these memberships are only temporary, and after a period of time, they will be released from their second post and returned to their original team.

The following members are outside of AKB48 and hold a dual position with Team A.