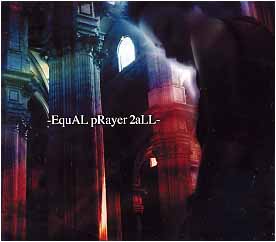 -EquAL pRayer 2 aLL- is the second mini-album released by Ayabie. This was released in two different versions: a limited CD+DVD edition and a regular CD only edition. The limited edition comes with a DVD of the PV for the Like an Edison exclusive single "Kuroi Tsuka Sasagu Itoshi Negai". This edition is also in special digi-pack casing. The regular edition comes with the making of the aforementioned PV as well as a long interview in CD-EXTRA format. Copies of the mini-album includes one randomly chosen dress-up jacket card. The mini-album reached #145 on the major Oricon charts, where it charted for a week.