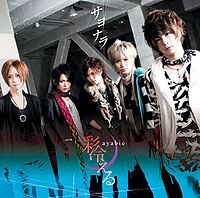 Limited Editions A & B CD Tracklist

"Sayonara" is the 19th single released by Ayabie. This was released in three different versions: two limited CD+DVD editions (A & B) and a regular CD only edition. Both limited editions come with the same CD tracklistings, but differ in DVD contents. Limited edition A comes with the title song's PV and making of, while limited edition B comes with backstage scenes from their 2009 tour colorful rock party. The regular edition comes with another B-side. The limited first pressing of the regular edition grants one randomly chosen out of a possible six Ayabie trading cards. The single reached #11 on the Oricon charts, where it charted for three weeks.