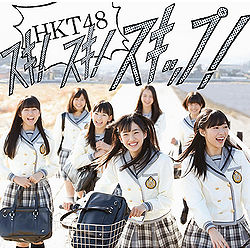 "Kataomoi no Karaage" is a song recorded by HKT48, sung by Amakuchi-hime. It is used as the ending theme song for the Japanese-language dub of My Little Pony: Friendship is Magic. It appears on the Type-A edition of the single "Suki! Suki! Skip!" as track #3.

There are currently two versions of "Kataomoi no Karaage" to be found in HKT48's discography. These versions are: