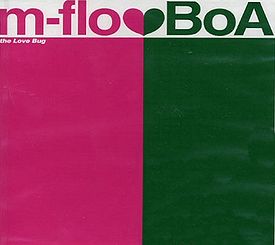 "the Love Bug" is the 16th single released by m-flo, and it is the third single released in their m-flo loves series. The song is a collaboration song between m-flo and Korean pop singer BoA. It is part of the m-flo loves project. The single reached #8 on the weekly Oricon chart, and stayed on the chart for a total of 11 weeks, selling 56,231 copies.