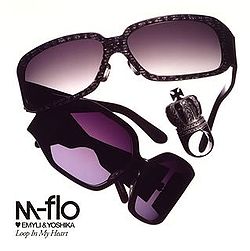 "Loop In My Heart / HEY!" is the 19th single released by m-flo, and it is the sixth single released in the m-flo loves series. This single features EMYLI and YOSHIKA on the first A-side, and TV personality and Enka singer Wada Akiko on the second A-side. A remix of the song "let go" featuring YOSHIKA was used as the B-side. Because this single was a double A-side, the back cover also featured a different CD art instead of a standard single's back cover.

This single reached #9 on the weekly Oricon chart, and stayed on the chart for a total of seven weeks, selling 29,103 copies.