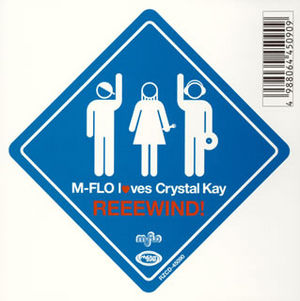 "REEEWIND!" is the 14th single released by m-flo, and their comeback single. It is their first single since the departure of LISA from the group and features Japanese pop singer Crystal Kay. It is the first release of the m-flo loves... series where they feature different musicians in each song. It was released right alongside Crystal Kay's 11th single "I LIKE IT", which is credited to Crystal Kay loves m-flo; Each single has a remix of the opposing single on it. The B-side "DO YOU LIKE IT?" is a remix of both songs by Fantastic Plastic Machine. "REEEWIND!" was used as the Japan Railways' Shunkan Tokyo commercial song. The CDs were followed up a month later with the release of the double A-side vinyl single "I LIKE IT / REEEWIND".

The single reached #9 on the weekly Oricon chart, and continued to rank for a total of ten weeks. "I LIKE IT" out ranked "REEEWIND!" landing the #8 position, marking Crystal's first single in the Top 10.