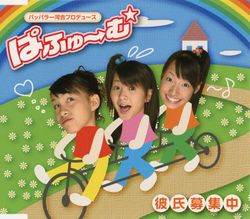 Kareshi Boshuuchuu is Perfume's second single and their last before being produced by Nakata Yasutaka. Like their first single, Kareshi Boshuuchuu was sold in limited quantities in the group's hometown of Hiroshima. Originally ¥500, the single now goes for around ¥40,000 (around $400) on auction websites. Unlike their releases after being produced by Nakata Yasutaka, this single is completely void of the electronica Perfume is known for today; instead, favoring the sound of idol pop.