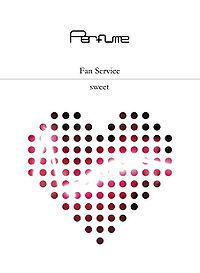 Fan Service [sweet] is Perfume's fourth major single; and ninth overall. It includes a CD and DVD with the PVs for the two songs included on the single. The single came in a special box package and a 20-page photobook is also included. This single debuted at number 20 on Oricon daily charts, a first for Perfume to reach the top 20. It reached #31 on the weekly charts, charted for nine weeks and sold 9,124 copies. The single is now out of print and new copies can fetch a price of up to ¥20,000 ($200). When the booklet included in the single is flipped backwards and inserted, the pattern on the front of the box becomes rainbow patterned

"Twinkle Snow Powdery Snow" was first released as a digital download in December 2006.

A 7" analog was released in limited quantity for "Chocolate Disco" in March 2007 containing the "extra mix" of the song by Nakata Yasutaka. It was given away in June by "remix", a magazine, to the first 100 people who sent in for the record. The catalog code was (PSRE-2114).