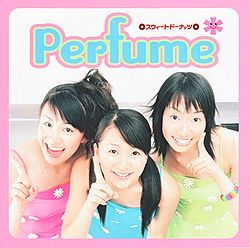 Sweet Donuts is Perfume's first single after being signed to BEE-HIVE RECORDS, and third overall. It is also their first single in which they were produced by Nakata Yasutaka. Since their 2005 major debut, the single has been incredibly hard to find and can be found on auction sites for more than double its original price. In February 2008, the single was re-released and included in the "Fan Service ~Prima Box~" CD+DVD boxset.

The b-side Jenny wa Gokigen Naname is a cover of the 1980 song by Juicy Fruits.

This single did not chart on the Oricon charts.