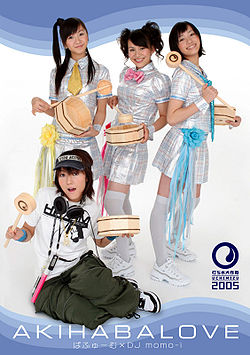 Akihabalove is a special release by Perfume and is not part of their official releases by their producer Nakata Yasutaka. This was made as a promotion for the Uchimizu events the summer of 2005. It was produced by DJ Momo-i (Momoi Halko) (who was part of UNDER17) and was only sold at events and at some online shops. Because of its limited release, this is now a collector's item and can cost as much as 52000 yen (~450 USD) on Yahoo Japan Auctions.

The package contains a CD with the Akihabalove song and a karaoke version. The DVD includes the Akihabalove Promotion Video (Anime for the Uchimizu Mission Project with Perfume's voices). Also, a dance version of the video is included with the 3-angle option (front, back and closeup).