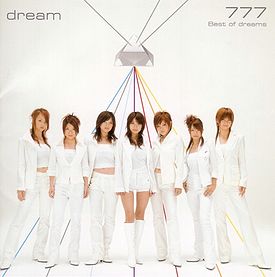 777 -Best of dreams- (pronounced "three seven") is the first self-cover and second best album released by dream. It was their first album as a 7-members group, and it features covers of 3-member dream's A-sides. First press editions included a sticker and two non-cover bonus tracks (the only two songs 7-member dream had released at that point). The album reached #33 on the weekly Oricon charts and charted for three weeks.