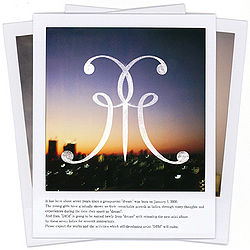 DRM is the first, and only, mini-album released by DRM (previously known as dream, third mini-album overall), and their debut release under that name. It was released in two editions, CD+DVD and CD Only. First pressings came with a clear plastic cover which held (along with the CD's foldout liner notes) three cards resembling the Polaroids in the design of the normal cover (skyscrapes with the group's new logo in the foreground, and English text below the "photo"), as well as a sticker of the new logo (white-on-black for the CD, black-on-white for the CD+DVD). The mini-album reached #108 on the weekly Oricon charts and charted for one week.