Music Is My Thing 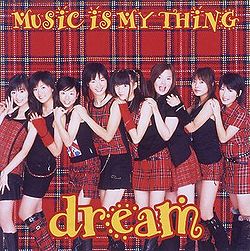 "MUSIC IS MY THING" is dream's 14th single and their first single as an 8-member group. First press copies came with a slipcase featuring the regular cover. When the slipcase is removed, one of eight special sleeve covers (each featuring a headshot of one the group's members) is revealed. The title track was used as the fifth ending theme to the anime Hikaru no Go. The song itself was originally recorded, in English, by Belgian artist Samantha Gilles in 1986. A PV was released on the dream party DVD and its "making of" was released on the dream world limited edition CD+DVD. The single reached #18 on the weekly Oricon charts and charted for four weeks.