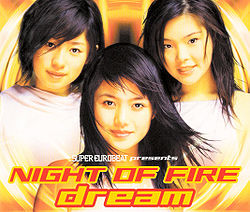 "SUPER EUROBEAT presents NIGHT OF FIRE" is dream's fifth single. The single was simultaneously released on the same day as the SUPER EUROBEAT presents EURO "dream" land. A PV was released on the DAYDREAM DVD and VHS. The song itself is a cover of a parapara classic, previously recorded, in English, by the Italian artist Niko in 1999, and later covered, in Japanese, by HINOI TEAM in 2006. dream's version features Japanese lyrics by group member Matsumuro Mai. The single reached #20 on the weekly Oricon charts and charted for four weeks.