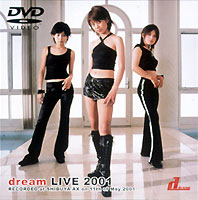 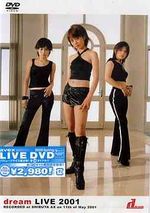 Dream LIVE 2001 is dream's first concert DVD that was filmed May 11, 2001 at SHIBUYA-AX. First pressings included a trading card. A half-priced reissue was sold between March 24 and April 29, 2005. The performances of "Believe in you", "brave", and "Breakin' out" are multi-angle tracks with an angle for each of the group's three members. A performance of My will from this recording was the second track on the single "Our Time", and four others were included on the album Greatest Live Hits. This DVD reached #7 on the weekly Oricon Charts and charted for 2 weeks. The re-issue did not chart.