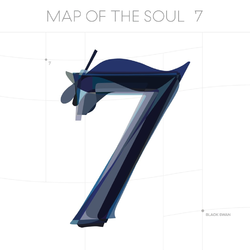 Black Swan is a digital single released by BTS. It peaked at #7 on the Gaon Digital Charts. It also managed to chart in several countries aside from South Korea, reaching #46 in the United Kingdom and #57 on the US Billboard Hot 100. Two music videos were released to promote the song, both inspired by the 2010 movie Black Swan. It was awarded the Melon Popularity Award for five consecutive weeks.

Originally released in Korean, a Japanese version was released six months later on their Japanese album MAP OF THE SOUL: 7 ~THE JOURNEY~.

The first full promotional video released was an "Art Film" version, released on the same day as the single. Also inspired by the 2010 Black Swan movie, it's an artistic interpretation of the lyrics by the dancing troupe.

The video features an interpretative dance performed by MN Dance Company, a Slovenian modern dance group. The opening quote, "A dancer dies twice — once when they stop dancing, and this first death is more painful", resonates through the performance and with the lyrics. The video then fades to an abandoned mall where seven dancers, in a straight line, walk into the frame. The following scene shows one shirtless lead dancer standing apart from the rest, who are dressed in over-sized suits. A "dance battle" starts between the two: at first the shirtless man is trying to run from the others but by the end of the performance he rises up with their help.

The official music video was released more than a month later, on March 4th, without any previous announcements. It was filmed entirely in the Los Angeles Theatre.

The video starts with all the members dancing in white in a dark environment. It starts centering on each member, every one of them interacting with their shadows: Suga's shadows breaks free from himself, Jin is haunted by his reflection,... In-between shots of intricate choreography on the empty stage are used. Their outfits change from white to black, as references to good and evil; at the end of the video, their outfits remain black.

The choreography was created by Sergio Reis, a Brazilian dancer. It was first performed on BTS's appearance on The Late Late Show with James Corden, on January 28th.