"RUN" is the sixth Japanese single released by BTS. It comes in four versions: a limited CD+DVD edition, a regular CD Only edition that comes with 1 trading card (out of 8 variations), a limited CD+GOODS Loppi HMV edition that comes with an original desk calendar with member photos (all 13 pages, starting April 2016), and a regular CD Only BTS SHOP edition that comes as an analog LP size. All editions come with an event lottery ticket. The title track is the Japanese version of the Korean song of the same name, and includes the Japanese version of the Korean song "Butterfly" as the B-side. Both original songs can be found on their fourth Korean mini-album Hwayang Yeonhwa pt.2.

The single was certified Gold for shipment of 100,000 copies.

The original track was used in commercials for PUMA Korea advertisements.

The music video was directed by Choi Yong Seok and Edie Ko from Lumpens. It follows the story created by their previous song, "I NEED U". It shows the characters previously presented having fun with each other and sharing friendship moments. After all the party and fun, some of them start to fight each other. The music video ends with them wreacking havoc in a tunnel and running away.

Another music video was released for the Japanese version of the song, also directed by Lumpens. It features BTS performing in a building, with cut-ins of each of the characters dealing with a sort of manifestation of their issues. 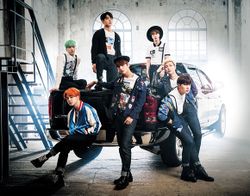