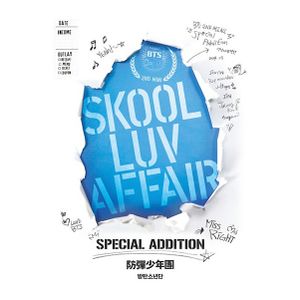 SKOOL LUV AFFAIR SPECIAL ADDITION is an album released by BTS. It's was released three months after their mini-album SKOOL LUV AFFAIR. It includes their second mini-album tracklist as well as the new tracks "Miss Right," which was used as the title track, and "Johayo (Slow Jam Remix)" as well as six intrumentals. The mini-album came with a 100-page photobook, a randomly selected photo card, and a DVD containing their mini-album showcase, showcase making of, interview, "Sangnamja (Boy In Luv)" behind-the-scenes and "Haruman" MV making of.

In 2020, Big Hit Entertainment made a survey asking which of BTS's discontinued releases would be more wanted to be again available for sale. SKOOL LUV AFFAIR SPECIAL ADDITION came first in the pool, and was re-released on October 13th, 2020. It charted #3 on Oricon weekly charts.