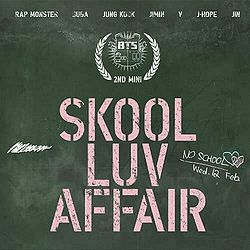 "Haruman" is a song recorded by BTS. It can be found as track #5 on their second mini-album SKOOL LUV AFFAIR. On international listings and digital platforms it is named "Just One Day".

A Japanese version of the song was first released on their second Japanese single "BOY IN LUV".

The music video for "Haruman" was released two months after the release of the mini-album, on April 2nd. It was directed by Lumpens. It features the members sitting in the light and shadows as well as dancing with chairs on a white background.