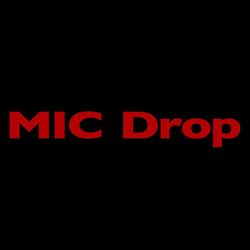 "MIC Drop" is a song recorded by BTS. It appears as track #7 on their fifth mini-album Love Yourself Seung 'Her'.

On November 24th, a music video of the song was released, titled "Steve Aoki Remix", featuring DJ Steve Aoki and with parts of its lyrics changed to English. On the same day, a digital single was released featuring American rapper Desiigner. Desiigner opens the songs with his rap, and the song has its changed English lyrics.

A music video was released on November 24th for the remix version of the song. It features Steve Aoki.

The video starts with Aoki going to a DJ console to start up the music. In front of him, behind a glass wall, the members start their choreography. The setting changes but they keep dancing to the music. In some of the scenes, the figure of Aoki looms behind them. By the end of the music video, the band are on an outside setup surrounded by exploding cars. At the end, SUGA stays behind while the other members disappear. Then, he drops his microphone before leaving. Steve Aoki removes his headphones and leaves too.

On December 5th, the Japanese version of the music video was released, with the same setup as the original.