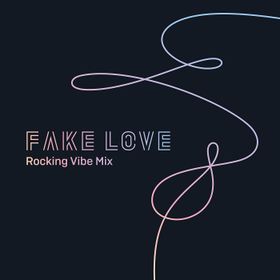 "FAKE LOVE" is a song recorded by BTS. A remixed version was released on digital platforms on June 2018, a month after its release on their third album LOVE YOURSELF Jeon 'Tear'. It debuted at #6 on Gaon charts and peaked at #1.

"FAKE LOVE" is described as a emo hip hop, grunge-rock, rap-rock and electropop song with elements of trap, pop-rock and adult contemporary music. One of its highlights is the high range of its vocal line. The song is about a love once believed to be destined, but in the end it turned out to be fake.

The first music video for "FAKE LOVE" was released on May 18th. It continues the extended story-line of BTS' fictional narrative universe by connecting "fantasy and reality, past and present" with multiple Easter eggs, and symbolisms.

The video opens with a flower trapped inside a glass and then switches to show close-up shots of Jin and Jungkook. The clip then blacks out briefly before showing silhouettes of the seven members who start performing the song choreography. As the light brightens, the members are seen dressed in black leather outfits while they don raven black shade hair. The visual then rewinds to show Jin standing inside a room painted in bleak colours and filled with shattered glass. Jungkook plays the protagonist of the visual, as he runs through a hallway as floorboards collapse beneath his feet. He keeps searching for his band-mates on his own inside a maze-like manor. The video alternates with scenes which show the members reflecting their own personal struggles in several decaying rooms and group-shots of the band performing the choreography. Over the course of the clip, Jin tries to protect a flower as everything around him falls apart. As the flower crumbles to ashes, "annihilation" follows.

On June 1st, another music video was released. This was an extended version of the original music video for their remix "Rocking Vibe Mix".