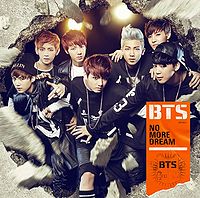 "NO MORE DREAM" is Bangtan Boys's debut Japanese single. It came in three versions: a limited CD+DVD edition (A), a limited CD+GOODS edition (B), and a regular CD Only edition. The Limited Edition B came with an original dog tag. All editions came with a high five event lottery ticket.

The title track is the Japanese version of the song found on their first Korean single "2 Cool 4 Skool". The original version ranked #124 on the Gaon weekly digital chart.

The Korean original version had a promotional video released a day before their debut, on June 12th, 2013, after they released two teasers.

It features the members dancing and singing in the street after crashing a bus, in a graffited building and inside the bus itself.

A 'Choreography Version' music video was released four days later on June 16th. This time, they perform their choreography between the graffited building and outside on the streets. The dance was entirely choreographed by Son Sung Deuk.

A music video was released for the Japanese version of the song on May 25th, 2014. The locations for the shooting are different, but it follows the same theme as the original version. They can be seen singing and dancing inside different vandalized buildings. 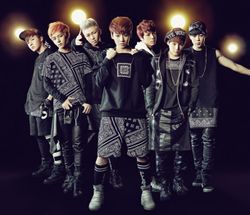