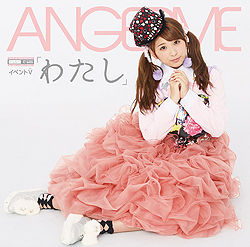 "Watashi" is a song recorded by ANGERME, sung by Fukuda Kanon to commemorate her graduation from ANGERME in November 2015. It appears on the single "Desugita Kui wa Utarenai / Dondengaeshi / Watashi" as track #3. The Event V was sold only during launch events and therefore did not chart on the Oricon charts.

There are currently two recorded versions of "Watashi" found in ANGERME and Hello! Project's discography. These versions are: