We Are Bulletproof Pt.2 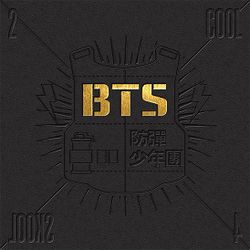 "We are bulletproof PT.2" is a song recorded by BTS. It can be found as track #2 on their debut single "2 COOL 4 SKOOL". It was used as a follow-up song when promoting the single.

The music video for "We are bulletproof PT.2" was released on July 16th, 2013. It was directed by Hong Won Ki.

It features the members singing and performing on a chess-like stage.